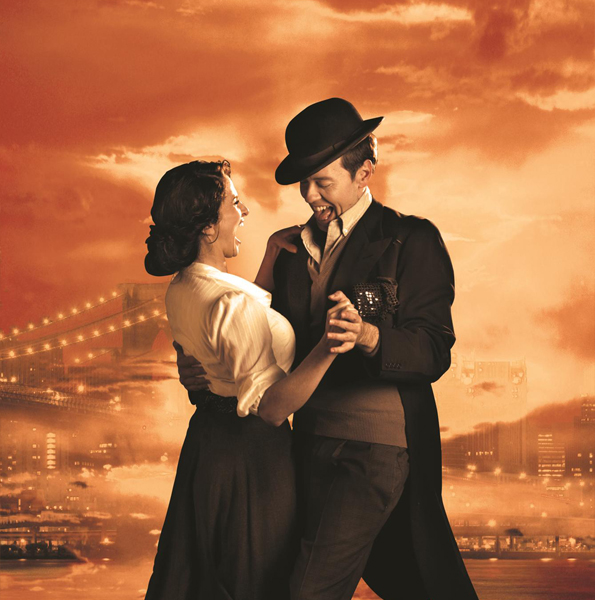 Allan Knee’s acclaimed Broadway production, Syncopation, finally reached our shores in September and had its Australian premiere at Chapel off Chapel.  Set in New York in 1912, the production saw its characters swept up in the ragtime jazz revolution of the day, and highlighted how dangerous and wild ballroom dancing was during that time, compared with the risqué and extravagant art it is now.

Featuring only two performers – Steve Mouzakis as ‘Henry’ and Emma Palmer as ‘Anna’ – and lasting for close to three hours, Syncopation is a demanding piece for both performers. However, they carried the piece with confidence and flare, without faltering or losing momentum.  With convincingly strong ‘Nooo Yawk’ accents and palpable energy, I was thoroughly impressed by the high calibre of their performances.

At times humorous, Syncopation tells the story of Henry, who has dreams of becoming a ballroom dancer, but alas, doesn’t have a partner to practice or perform with.  He places an advert in the newspaper inviting women to join him (scandalous!) and after much giggling and discussion amongst her work colleagues in a sequin factory, Anna arrives at Henry’s door to begin learning to dance.  At first, they are clumsy and awkward, and Anna is understandably cautious about Henry’s intentions (he isn’t allowed to touch her), but there is immediately an evident chemistry between the pair.  The initial relationship between them sheds light on the roles of men and women during the era which is amusing to watch, but sadly isn’t always so different even in our modern culture.  Their relationship evolves along with their dancing and their intimacy grows.  We see the characters face temptation, doubt, loss, redemption and joy as we follow the story of their evolution.

Ultimately, Syncopation is a story of spirit, determination, and hope against odds.  It is also a story about love and adding colour to your life, of courage and growth, and it shows us that dance can set you free.

Within minimal dancing and simple stage sets, there was little to distract from the story of Anna and Henry, and what a story it was.