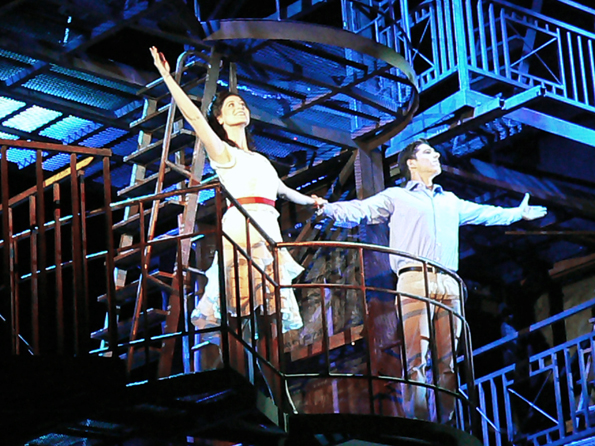 West Side Story is a classic musical that has been loved for many generations.  In its time, West Side Story was a contemporary version of the Romeo and Juliet tragedy.  This show is one that preserves so much of what musical theatre was in the 1950’s.  The scripting, choreography and the score all reflect the era they were created in.  With all the revamping of old stories and shows being recreated in a fresh a new manner, it is nice to see some traditional repertoire kept alive.

Joey McNeely, director of the current production playing in Star City’s Lyric Theatre, has preserved this vintage show well.  He was personally chosen by original director and choreographer, Jerome Robbins, to recreate the show worldwide.  However, will this be enough to capture the up and coming generation of musical theatre goers?  We will have to wait and see. The raunchy advertising flying on banners and buses around the city suggests that the advertisers weren’t so sure, considering that the flyers don’t reflect the characters they portray, nor do the characters wear the types of outfits shown. I guess they are hoping to draw a younger and more vibrant crowd to this tour of West Side Story.

The Australian cast were very young compared to that of the current Broadway production, but they performed their hearts out, with standout cast members being Alinta Chidzey as ‘Anita’ and Nigel Turner-Carroll as ‘Bernardo’. I also enjoyed the ensemble performance of May Yen Cheah, a  ‘Shark girl’. She is a dancer to watch out for in the future.

Overall the cast were quite strong in their dance technique.  Vocally they blended well, and they were committed to the acting.  However, it just did not hit the mark.  It was quite obvious that the scenario being portrayed was not too familiar to most cast members, growing up in Australia where racism is present, but not to the extent that it was prevalent in 1950’s USA, where the musical is set.  Most cast members were too young, or performed like they were too young, to show that they fully understood what the story was about.  Alinta Chidzey and Nigel Turner-Carroll, mentioned before, were quite convincing, but the rest of show felt like a really good version of a high school production, with some talented technical singers and dancers.  In comparison to the Broadway show, where the performers live in the very city where this musical was set, our Australian cast unfortunately fell short.  Nigel Turner-Carroll (Bernardo) told me himself that every movement is a ‘psychological gesture’, and often it looked like the performers where doing their steps, but not living the movement.  As time goes on and they grow into their roles, I’m sure that this will change.

The costumes are vibrant, the set is interesting and musically the score is brilliant. The orchestra played well and overall the cast did give their best. I know they will continue to grow into their roles and learn a lot from being involved in such an important show in musical theatre history.  I wish them all the best with the national tour.  West Side Story is a must see for all students of musical theatre.