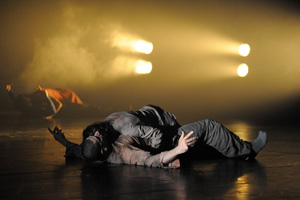 Hofesh Shecter is regarded as one of the UK’s most exciting artists in both the music and contemporary dance fields, and after seeing his work Political Mother, I can understand why.

A shattering, powerfully explosive piece, this work should come with a warning that tells of the need for recovery time afterwards. Discussing power and oppression and how it can affect intimate relationships, the show opens with a Japanese Samurai committing harikiri to Verdi’s ‘Requiem’.

There is an intense partnership between the eleven dancers and eight musicians (four drummers and four percussionists). Ear plugs are provided, but even so we are almost physically assaulted at times by the overwhelming noise.

A solitary performer becomes a menacing, crazed dictator shouting mindlessly like a rock star whose words you can’t quite catch. There is an ominous Big Brother feel, with allusions to the Holocaust and war eras of modern history. There is also the theme of religious oppression and unarmed civilians attempt to flee the horrific events but are driven back to the violence. 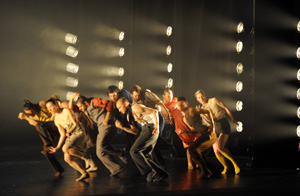 Technically the dancing is extraordinary. You can see the Batsheva influence where Shechter once worked. The company has an incredible loose flowing ‘line’, and is soft, yet very controlled with great use of demi plie (possibly from the Mediterranean folk dance influence). There is a lot of ensemble work, with whirling, circling lines, interspersed with frenetic solos. At times there is Guerin-like twitching.

We see friendships and loving couples, and how this is destroyed by The Oppressive State. There is a sense of community of ‘the masses’ and how individuals can be controlled and terrorised by The State.

Scattered synchronic movements are broken by solos where people almost seem to be in physical pain. There are exultant dances of shuddering adulation where the dancers seem to lose their sense of self.

For some sections the costumes are bright and colourful, but for the most part they are rather drab.

Lee Curran’s lighting is an integral part of the show. At times the lighting is like a rock concert, and at others like a prison cell. Visually this work is superb.

To end, a Joni Mitchell song gave a gentler note of hope, for some. As did an orange sign saying “Where there is pressure there is folkdance”.

There are just so many layers of meaning in this work that it really needs to be seen several times to decipher them all.

Political Mother is a challenging, confronting work about the horrors of war and oppression all depicted with artistic brilliance. It is a scary analysis of our modern world.