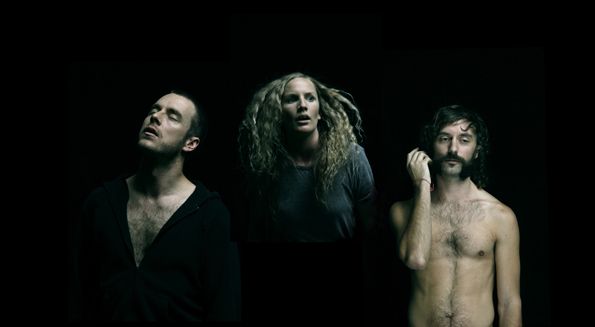 The premiere of Luke George’s latest work, NOW NOW NOW was a sold out affair with some of the excited audience forced to sit in the aisles due to a lack of seating.

Prior to entering the performance space, we were asked to remove our shoes, which aside from ruining my outfit, gave a more intimate feel to the evening – as though we were gathered in someone’s living room to watch the show. White felt carpeted the entire floor inside the theatre, and even the bleachers on which we were seated were covered in the soft fabric. I guess my stiletto heels would have damaged such a surface.

The chatty audience was surprised to find that the dancers were already on stage and in character as we took our seats and marvelled at the contrast between the white floor and black curtained walls. I heard people mutter things such as “we should have brought drugs” in jest, given that the three dancers on stage were costumed in fur, plastic cod pieces, gold shorts, hippie dresses, and bright green pants with a yellow jock strap on the outside. One by one, the performers changed costume on stage into simple pants and t-shirt in bright colours.

In the front corner of the stage was a TV facing away from the audience which George silently switched on. No sound was emitted from the television, however the performers watched engrossed and began moving as if copying and learning choreography that was being shown. From the looks of things, the dancers were attempting to learn a dance sequence to the tune of “One, singular sensation” from A Chorus Line. Every nuance and step of the dancers was so true to what we actually look like as we copy things from the television, that the audience erupted in laughter. There was no sound in the theatre, except the occasional tummy growl or crossing of legs from audience members – oh, and the fits of laughter that were constant by this time.

In NOW NOW NOW, it wasn’t so much the choreography itself that was astounding, it was more the concept and the execution of the characters, plus the use of voice that created an amusing performance. Each of the three performers – Luke George, Kristy Ayre and Timothy Harvey were outstanding. I cannot even begin to describe this show. It was outrageous, absurd, hilarious, fun, brilliant and one of the best things I have seen this year. I guess that will have to suffice.