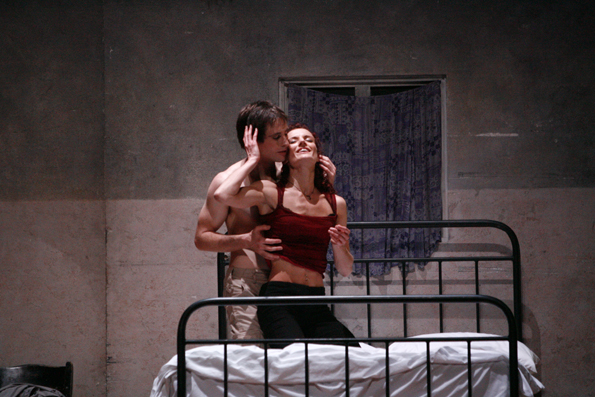 Set to Georges Bizet’s energetic score, The RNZB’s latest production of Carmen is a contemporary adaptation of the opera, which was premiered in 1875. This version is set in the heat of Rio de Janeiro, but the plot is essentially that of the original: Carmen, a sexy and rebellious cigarette factory worker, exercises her powers of seduction upon the hapless José, whose life is forever changed for the worse. The tragic ending is played out in the seedy Bar Pastia.

Orchestrator John Longstaff compensates for the absence of singers with solo instruments that capture the vocal qualities of the operatic arias, among them the well-known Habanera and Sequidilla. Thanks to the impeccable timing of the Auckland Philharmonia Orchestra, who make light work of some tricky but crucial transitions, even love rival Escamillo’s rock star turn in this adaptation makes musical sense.

Didy Veldman’s choreography does not replicate nor ignore the score; instead it engages it in a musically intelligent and dramatically satisfying dialogue. Inventive lifts and seductive gestures are married with classical vocabulary and comic timing in a sound alliance, which the dancers embrace with admirable gusto and dramatic flair.

The pas de deux scenes between José and his forsaken fiancée Micaela are beautifully handled, and the love-making scene between Carmen and José proves the highlight of he evening. The sexualised masculinity of Escamillo’s rock persona proves an intriguing match to Carmen’s own heightened sexuality, though Carmen remains the true power-broker in their relationship. Though some of the male corps de ballet scenes, in which the men play gangsters clad in leather jackets with shades and mobile phones, are somewhat cliché, the dancers’ sense of fun partially rescues them.

Michael Braun as Jose and Pieter Symonds as Carmen

It is with regret, that due to my time constraints, it was not possible to view the opening cast, which featured dancer Abigail Boyle in the lead role. Guest artist Pieter Symonds captured Carmen’s aloofness well and there was good chemistry between the two leads, which is to be expected in a dancer of Symonds’ calibre. Referring specifically to the portrayal of Carmen, however, a greater articulation of the limbs and freedom of movement would have lifted the interpretation to an even higher level.

Overall, the RNZB’s Carmen is a production of which the company can be proud. Whilst it is not as cutting-edge as some would like, it does maintain an invigoratingly contemporary aesthetic without sacrificing the essence of the original or indeed the appeal of classicism. The RNZB should be applauded for offering its audiences the chance to experience works beyond the classical canon.

The Royal New Zealand Ballet’s Meridian season of Carmen has now finished. However, the company will be crossing the ditch in August to present Romeo and Juliet. The dates and venues are: