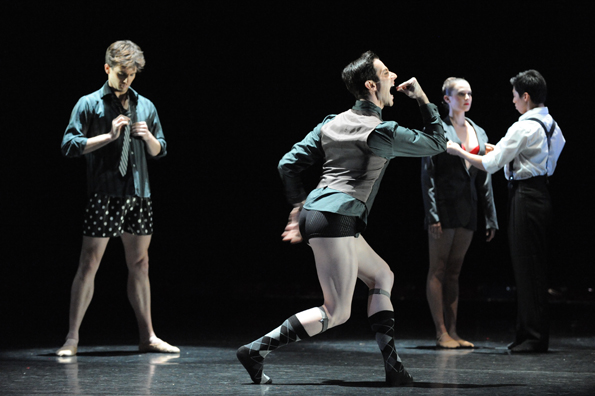 This year, The Australian Ballet’s Bodytorque season wove fashion into its theme, and brought to light its bond with ballet.  Consisting of new pieces created and performed by the company’s own dancers (with the occasional outsider brought in), each choreographer collaborated with young designers to create new works that focused as much on the costumes as the dancing.  The Sydney Theatre was the perfect venue for a season such as this, because it is modern and stylish as well as suitably intimate, so no nuance of choreography or design went unnoticed by the audience.

Fold, by Principal dancer Robert Curran opened the programme with the stark stage inhabited only by a percussionist at a drum kit and coryphée Stephanie Williams.  Williams performed a well controlled solo before being joined by Jarryd Madden for a fluid pas de deux.  Curran’s choreography was classical and elegant, and set to the sole sounds of the percussionist who remained onstage throughout the piece.   Amy Harris was a standout, with exquisite line and control and a maturity and presence that was impossible to ignore.  She was lifted, folded, and unfolded by the other dancers and brought great breadth to the piece.

Daniel Gaudiello’s second Bodytorque outing as a choreographer (he created his first work in 2009) was South of Eden, a much darker piece than Fold.  The stage was darkly lit, with oversized frames suspended from the ceiling, as well as a rope, conjuring images of a dungeon or seedy night spot.  The soundtrack of heavy breathing lent a sinister air to the piece, but despite the dark elements, the choreography did not become harsh or angular.  Soloist Juliet Burnett was clad in suspender tights and a bondage-style mask but spun on the rope with a lightness that belied her external appearance.  What was great about this piece was Gaudiello’s willingness to take risks.  It was edgy with daring lifts, confronting costumes, haunting music, and a difficult topic of female escorts.

The only female choreographer in the programme was Alice Topp, and Trace was her first foray into creating for Bodytorque.  Trace set out to explore the relationship between dance and design, with the motivation coming from the fabrics themselves. Topp explored the role of costume not only as a decoration but as something of functional value.  Often with first time choreographers, the work can have clunky moments where transitions look awkward, the steps lack cohesiveness with music and ideas can go unrealised.  Topp’s piece had none of these elements, but instead appeared as a vision of sheer perfection.  The choreography was seamless, and it flowed out of the music.  It was breathtaking to watch.  The two dancers wore flesh coloured costumes that were barely more than underwear, but extra pieces of fabric were stretched, twisted and removed, allowing for an entirely new choreographic vocabulary to be created.  There were moments where the movements seemed to suspend in the air as though time and space had been altered.  Topp is certainly a choreographer to watch.

Bodytorque again provided an excellent platform for new works by Australian dancers.  I look forward to next year’s instalment.