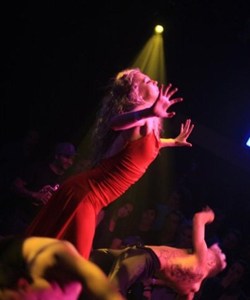 Ev and Bow’s I Want it All, was held at NIDA’s Parade Theatre which is a perfect sized theatre for a graduation performance. The night opened with a huge song and dance number to the show’s title ‘I Want it All’. The stage was packed with incredible dancers.

Two of the best items were both choreographed by the studio directors. Sarah Boulter’s Paint It Black and Lisa Bowmer’s Special Ones were both outstanding. There was a very creative vocal number called Foreign Land that featured a solo vocal performance while a few dancers performed isolated by spotlights. There was some powerful and insane movement!

Ev & Bow won the open jazz section at the McDonald’s Performing Arts Challenge with Enough is Enough which they showcased again at this performance. The item demanded technical precision and stamina and the choreography was even tighter than when I saw it at the Challenge.

Every item paraded the strong technical training that the students had received throughout the year. The drama performances were also very entertaining, although the vocal numbers could have been a little stronger for the level of training.

Overall the standard has improved from last year. As one of the newest full time courses, only in its second year, Ev & Bow is going places.  Sarah Boulter and Lisa Bowmer are nurturing some amazing artists and there seems to be a wonderful rapport between the directors and the students.

UDC’s Urban Jam 2009 at Carraigeworks showcased a mix of their full time dancers, performance groups and casual class students. This made it a little hard to get a feel for the full time department of the school, but the additional performances created a jam-packed evening bursting with variety.

I enjoyed a wonderful performance from young students Alysha Percy and Ryan Buenaventura, who are part of a youth performance group.  A notable item called Chicago by Rosa Agius had a great concept with a hip hop flair added to a few famous tracks from the musical and Tiana Joubert’s High School Musical piece stood out it as it had a really strong theme. The choreography had some clever transitions and humour.

Costuming, in general, seemed a little casual but the best looking item was the opener – Fun House, choreographed by UDC’s Artistic Director Juliette Verne. It was fun, entertaining and dynamic. Juliette Verne creates some amazing choreography.

Unfortunately, the dancers got a little lost on the huge stage at Carriageworks. Although Carriageworks is a great theatre it made it hard for the work to connect with the audience as the space was just so sparse. On a smaller stage the dancers would have looked stronger.

The students are very proficient at hip hop, which is what UDC is known for. A number of the dancers needed a little more core strength and in the more technical disciplines the use of feet and elevation was a little lacking for a few. There were, however, several stand out dancers who are leaving the full time course in good stead. The standard has improved and UDC is definitely going from strength to strength.

Although the show was very long, it was enjoyable and showcased the many facets of Urban Dance Centre well.

Also held at NIDA’s Parade Theatre, ED5’s Full Time Performance was very entertaining and professional. The evening had one slick number after the other, making it hard to pick stand outs. The solo vocal numbers were hilariously entertaining and the group vocal numbers were all really well coached with excellent harmonisation and blending. A ‘FaceBook’ song was very funny and a piece called ‘All the Good Men are Gay’ was hysterical, with all the female singers dressed in wedding gowns.

All the dance numbers were really polished and energetic with a high level of performance. Every item was appropriately dressed for the style, theme and era which made the students look very professional.

The evening showed that the ED5 full time students have been exposed to a wide variety of disciplines and have grasped all of them, with Jazz, Hip Hop and Musical Theatre high on the agenda. Many schools attempt to train triple threats but sadly miss the mark. This is not the case at ED5.

There were many talented performers, so much so that a few of them have already been employed in the industry. Emily Cascarino was absent from the graduation performance as she has been cast in Mamma Mia and talented all rounder Emma Watkins recently won the Sydney Opera House dance competition called My Mutation. There were also several male students, all with great potential, which is really exciting.

ED5 is proving to be one of Sydney’s leading full time dance studios.

Held at the Glen Street Theatre, the show was delightful, demonstrating to us that Ms Pearson has created a wonderful opportunity for young dancers to gain performance experience in a professional environment. It was a great family spectacle and possibly the first ballet experience for many youngsters in the audience.

The dancers gave us a grand show with impressive technique and performance level. There were countless talented dancers in the cast, particularly Evan Loudon and Annabelle Miranda.  Shayarne Matheson also gave quite a mature performance. The students were joined by guest artists Yosvani Ramos and Kristy Corea from the Australian Ballet at special performances, which must have been such a thrill for them.

Although the Glen Street Theatre is a wonderful venue, unfortunately the stage was a little small for this performance. It would have been nice to see the dancers really travel around the stage. However, Nutcraker was a magical Christmas treat. It showcased the prowess of Tanya Pearson’s many talented full time dance students who have exciting futures ahead.